December 25, 2018
Rail Report - History Special's
LMS Black Five's
We all know the Black Fives as the 'do anything & go anywhere' engines. The Black fives were mixed traffic locomotives so they could handel goods and passenger. They were designed by William Stannier wo had previously been with the Great Western Railway. In his early LMS day's he designed his Stannier Mogul 2 - 6 - 0 in which he experimented with the GWR school of thought on locomotive design. A number of detail's in this design he would never use again realising the superiority of the detailsnot used on the GWR. Stannier realised that there was a need for larger locomotives. These were to be the LMS version of the GWR Halls but not a copy as the Halls were too wide to run on most places in Britian. The Black five shared similar cylinder arrangement (Two outside), internal boiler design and size and 6 foot driving wheel diamerters.

In their early days the locomotives were known as the 'Black Stanniers' from their black livery, in contrast to Stannier's other class of 4 - 6 - 0, the LMS Stannier Jubilee Class, which were painted crimson and known until April 1935 as the 'Red Staniers'. Later on, the nickname of the former became the 'Black Five', the number referring to the power classification. This was originally 5P5F, but from 1940 it was shown on cabsides as the simple figure 5.

There were a number of detail variations in the locomotives and they did not all remain in the same condition as built. Some locomotives built under British Railways administration were used as test beds for various design modifications with a view to incorporating the successful modifications in the Standard Classes of locomotives built from 1951 onwards. These modifications included outside Caprotti valve gear, roller bearings both Timken and Skefco types on the coupled and tender axles in varying combinations, and an experimental steel firebox. Other locomotives had modified draughting to 'self clean' the smokebox thereby reducing turn-around and disposal times and eliminating or mitigating one of the most unpopular jobs. 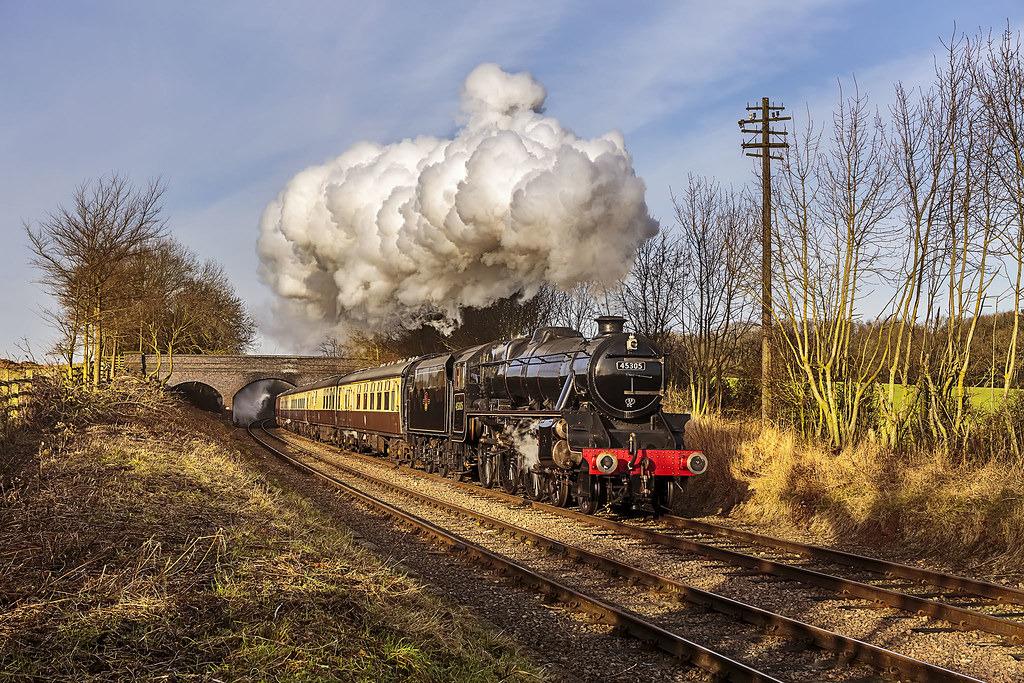 Only five Black Fives received names during their mainline working lives, a small percentage of the total produced, although seven more have been named in preservation. All of those named in mainline service were named after Scottish regiments. Locomotive 5155 carried the name The Queen's Edinburgh for only two years during the Second World War. Some sources have noted that no photographic confirmation of this naming is extant. Although this is neither unique to the class, nor unexpected given restrictions on photography during wartime. The evidence for the naming of the locomotive is set out in full in various sources

\45401 was the first Black Five to be withdrawn from stock in 1961 following a collision at Warrington, although the boiler was re-used and actually lasted to the end of steam on BR. The remainder of the class were withdrawn between 1962 and 1968. Some members of the class survived to the last day of steam on BR in August 1968.

45401 was the first Black Five to be withdrawn from stock in 1961 following a collision at Warrington, although the boiler was re-used and actually lasted to the end of steam on BR. The remainder of the class were withdrawn between 1962 and 1968. Some members of the class survived to the last day of steam on BR in August 1968.

Eighteen black 5's have been preserved with twelve of them being purchased directly from BR for preservation, the remaining six being rescued from Barry Scrapyard. One of each of the builders batch has survived into preservation: 7 LMS built engines & 11 by outside contractors. Of the eighteen to be preserved fourteen have operated in preservation, the class members that haven't yet run. Twelve black fives have also been operated on the mainline in preservation.