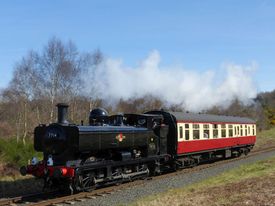 The Keighley & Worth Valley Railway is having their 50th Anniversary Gala in June/July 2018. They already have two locomotives booked now GWR 7714 Pannier Tank is joining them.

7714 is a GWR Collett 5700 class 0-6-0PT ‘pannier tank’, one of two examples on the Severn Valley Railway (the other being 5764). The 5700 class was the most numerous class of engine designed and built by the Great Western Railway; more than 860 were built between 1929 and 1950. Pannier tanks could be found at work all over the former GWR system and although designed primarily for shunting duties, they were regularly used on local freight and passenger workings. British Railways Western Region 'BR(W)' rated the class as 4F, although elsewhere the class was rated 3F.

What Other Locomotives Will Be At The Gala

Famous Steam Icon Royal Scot will be at some days at the gala. Also a GBRF Class 66 will be there (Thats what we heard. It is not comfermed.)
GWR 7714 Heritage Railways KWVR

Rail Report Credit: Martin Evans
LMS Crab 13065 based at the East Lancs Railway has failed with some tube cracks. She will sadly be out of service for the rest of 2018.
The ELR Chairman said:
"Two flue tubes on 13065 have been found to be leaking during a routine washout. The flues have cracked just inside the water space next to the tube plate in the smoke box. As the flues have only done 4 years on its ticket, the failure is unexpected.  It’s not possible to simply replace these two tubes as there is a significant chance other tubes may fail.
The estimated costs for works to repair the loco with new flues, tubes, small tubes, new elements and a small amount of mechanical work is over £60,000, plus any additional works that are identified.  That leaves the locos with 6 years left to run on the ticket.  Option A.
To get a 10 ticket year completed will cost and additional £31,000 (estimated) with a total cost of over £91,000.  By going for this option we would be able to avoid t…

Rail Report The Romney, Hythe & Dymchurch Railway Steam & Diesel Gala is fast approaching. The RHDR Steam & Diesel gala is a highlight in many enthusiasts’ calendar.
All available locomotives will be in operation during the days, this includes: No.2 ‘Northern Chief’, No.3 ‘Southern Maid’, No.4 ‘The Bug’, No.5 ‘Hercules’, No.6 ‘Samson’, No.8 ‘Hurricane’, No.9 ‘Winston Churchill’ & No.12 ‘J.B Snell’.
The RHDR has a visitor confirmed for their gala. Ravenglass and Eskdale Railway’s ‘Whillan Beck’ also known as ‘The Train from Spain’ will be visiting the RHDR for their gala. This will be a rare opportunity as there will be two Kruss locomotives under the same roof, Whillan Beck & The Bug.
Looking at the timetable for Saturday there are a number of interesting runs / movements, including a 21 mile non stop from New Romney via Dungeness to Hythe departing New Romney at 9.05am. Throughout the day visiting locomotive ‘Whillan Beck’ will be doing some shuttles from New Ro…